Each of the four enemies in Garbage Heroes has two base stats. Max HP is how much health the enemy has at the start of the battle, and Attack determines how much damage the player will receive if they make a mistake following the enemy's attack sequence.

Has a cameo as an opponent in Coco Cards Casino. He is the easiest opponent.

Features as a character in the fighting game Wham Bam Dan Jam Slam. Each character has hidden stats which change the way they perform in battle.

Their crippling soda-drinking habit keeps them awake at all hours. 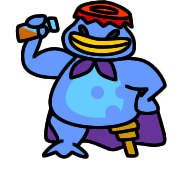 Features as an enemy class in Plunder Dungeons under the name Soda Admiral.